We’ve got big news: Timex is making a change.

For many decades now — a good chunk of our history, which reaches back to 1854 — we have been known to make watches that “take a licking and keep on ticking.” And that’s a sentiment that holds true to this day. Even our most refined, delicate and polished wristwatches are built to handle the real world and address your most practical time-telling needs.

But how we present ourselves to the world is getting a modern update that better expresses the outlook and mindset of our company in the 21st century: WE DON’T STOP™.

With this campaign’s debut, we’re unveiling a new ad in collaboration with notable change makers from around the world, as well as a charitable partnership with #TOGETHERBAND to further the “We Don’t Stop” mission and provide a platform for everyday heroes. These change makers include athletes, activists, actors, musicians and more, emblematic of the wide variety of people whose stories can serve as inspiration for billions. 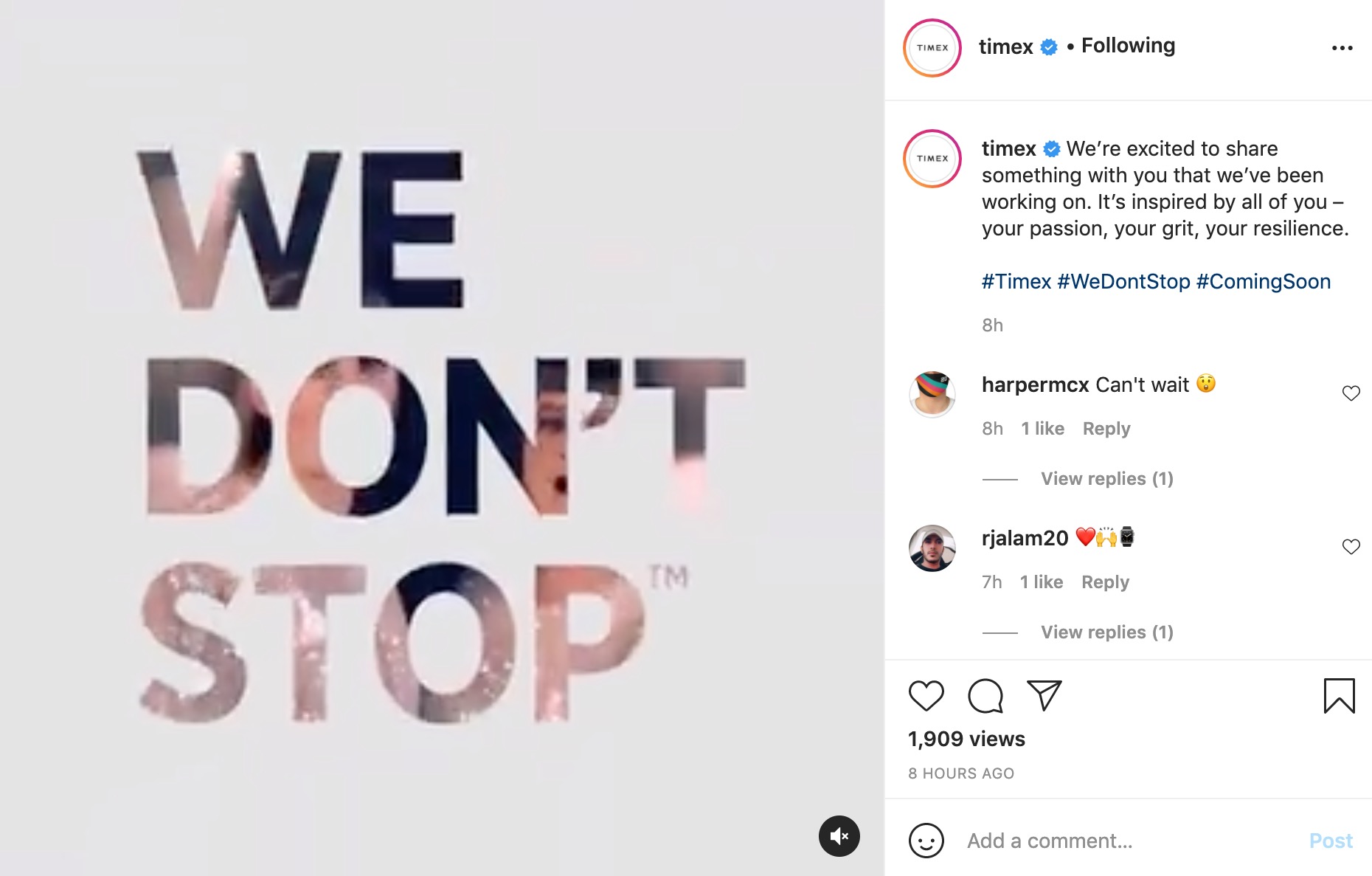 WE DON’T STOP™ conveys a message of hope and resiliency as many around the world continue to persevere in the face of difficult circumstances. The campaign’s hero video, shot pre-COVID, now symbolizes a future where people can be brought together again, to work toward common causes and celebrate each other’s achievements. This ethos serves as the inspiration for the campaign’s anthem video, overlaid with a special rendition of Queen’s “Don’t Stop Me Now” — a perfect encapsulation of what this change is all about, and how our brand is readying itself for whatever comes next.

“WE DON’T STOP is a natural progression for the brand,” says Tobias Reiss-Schmidt, President and CEO of Timex Group. “The campaign speaks to the resilience that we are all surrounded by – stories of grit, perseverance, ingenuity and heart – stories that strengthen us to carry on. WE DON'T STOP champions our everyday heroes and everything we have stood for over the past 167 years, without losing a step as we continue forward.”

For more than a century, we have always been innovative and forward-thinking, with bold new ideas for the ever-changing times. Timex has graced the wrists of presidents, traveled to space, and continued to innovate and collaborate with some of the coolest designers and brands in fashion. The new WE DON’T STOP™ platform symbolizes the continuation of a boundary-breaking mentality, championing everyday heroes that embody We Don’t Stop in everything they do.

This campaign is here to be more than an ethos at Timex; it provides a platform for all the stories out there that have inspired the company to keep going and to continue reaching toward greater heights. 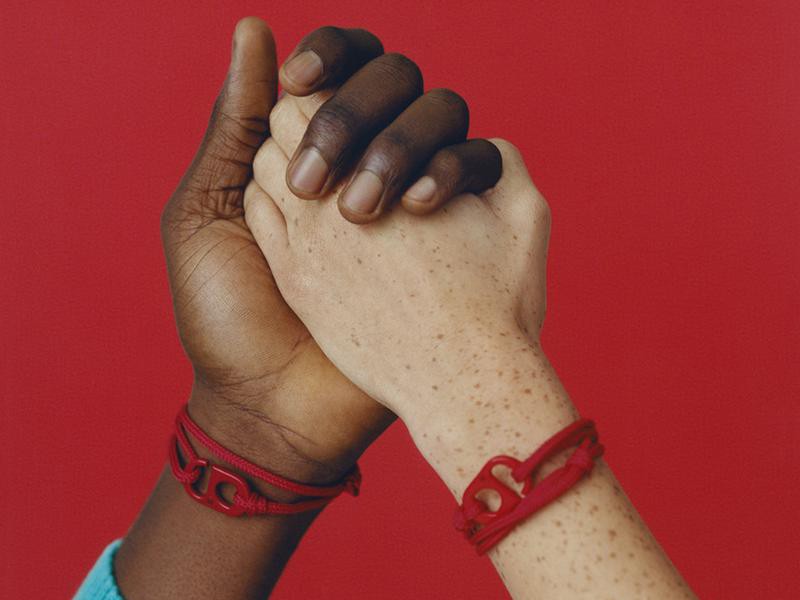 It is with that outlook that Timex has joined #TOGETHERBAND in driving awareness for this global campaign dedicated to creating a more equitable, peaceful and sustainable future for all. #TOGETHERBAND aims to provide aid and raise funds for the United Nations’ 17 Global Goals to achieve a more sustainable world by 2030. Timex Group has donated funds directly to #TOGETHERBAND, which will be allocated to the critical and life-changing programs supported by the organization. It is just one more step the company is taking toward a better future — something worth striving for as we continue to adapt, grow, learn and collaborate.

Please share your WE DON’T STOP story by tagging @timex and using the hashtag #WeDontStop on social media.

Read on below to learn more about all the changemakers we’re partnering with in this campaign, including Max Emerson, Jadakiss, Olivia Seltzer and many more.

JADAKISS: Def Jam and Roc Nation veteran MC, Jadakiss made his mainstream debut in 1994 as a member of the East Coast rap trio The Lox. Known throughout the 90s and 2000s for his distinctive gravelly voice, he has collaborated with some of the most celebrated hip-hop artists of all time.

CHLOÉ DUBOIS:  Chloé is the Executive Director and Co-Founder of The Ocean Legacy Foundation, a Canadian non-profit organization founded in 2014 with the goal to end plastic waste in our oceans. Ocean Legacy aims to accomplish this through education, advocacy, research and policy that improves infrastructure and waste management, and the foundation takes part in cleanup and restoration efforts to help catalyze anti-pollution actions worldwide.

SIDHARTH MALHOTRA: Sidharth is an Indian Bollywood actor who started his own career without any background or connections in the Indian film industry. His can-do attitude and upbeat personality have won him millions of fans from all over the world.

EFRAIN ALVAREZ: Efrain is an 18-year-old midfielder for the LA Galaxy and a soccer phenom taking the world of Major League Soccer by storm. The LA native became the Galaxy’s youngest player with his MLS debut game, which included two goals in the last period of play. Alvarez was also named to the 2019 Mexican U-17 FIFA World Cup team.

OLIVIA SELTZER: Editor and founder of The Cramm, Seltzer’s passion for news and staying informed led her to creating a newsletter for younger readers — one that garners more than 2.5 million monthly views. The Cramm is read in more than 80 countries, and it’s followed by celebrities like PINK, Chelsea Handler, Gwyneth Paltrow and Arianna Huffington.

LUCIUS — Lucius is an indie-pop band that consists of lead vocalists Jess Wolfe and Holly Laessig, drummer and producer Dan Molad, and lead guitarist Peter Lalish​. They’ve sold out shows big and small, headlined across US and Europe, played at Bonnaroo, End of The Road, Lollapalooza, Newport Folk Festival, Reading and Leeds Festivals and more and shared the stage with a variety of musicians.

NORTHEAST PASSAGE: The joint project of the U.S. Paralympics team and the University of New Hampshire, Northeast Passage is the current model to match for elite-level sled hockey, providing support and development for handicapped athletes to compete at the highest level.

MATT MAXEY: Matt Maxey is the Founder of DEAFinitely Dope, a company that provides sign language interpretation for live music events to make them more inclusive of deaf and hard-of-hearing fans.