Founded by Edson Sabajo and Guillaume ‘Gee’ Schmidt back in 2004, Patta® is a Dutch streetwear brand deeply rooted in Amsterdam’s energetic art and fashion scenes. The brand’s designers had money on their minds when they first joined with Timex® back in 2019, and our synergistic wristwatch, ‘Time is Money,’ proved itself to be a seamless blend between Amsterdam street style and watchmaking ingenuity. 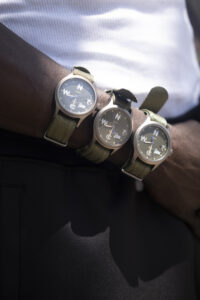 Today, we’re excited to announce that Timex and Patta have teamed up for a second collaboration: the Timex x Patta ‘Time is Money’ wristwatch—now, with a bold color update.

Having donned this watch at the time of its initial release, we can say from experience that the unique dial design of the ‘Time is Money’ collab will likely be the first thing to captivate onlookers as you hit the streets. The new, green color palette, however, ups the ante. Accented with dual branding—our classic Timex logo and Patta’s timeless script—the dial partially features bold worldwide currency signs: the Korean Won, Ghanaian Cedi, Indian Rupee, and Nigerian Naira.

When this iconic collab first dropped, we spoke with Creative Director Vincent van de Waal, who shed some light on the inspiration behind this stylistic choice:

“We wanted to give the dial artwork a bit more than just the function of telling the time,” he said. “The currencies make you aware of the speed of the world we live in. Time is money. But I think it’s up [to] the one who wears it to decide whether that’s something to strive for… or if it’s a sign that we should loosen up.”

This kind of philosophical thought isn’t lost on the watch’s latest iteration. Although we’ve emphasized its familiar, utilitarian traits with a new color palette, the design still points to the modern relationships we have with our time and money. Featuring a green, military-inspired, double-layer fabric slip-thru strap, the watch houses a quartz movement, 50 meters of water resistance, and a blue second hand on its INDIGLO® backlit dial.

The bandana included with the watch strikes those same chords, replicating the watch dial design to further remind its wearer to make these passing moments as valuable as possible. How, you might ask? We’re not saying we have definitive answers, but a watch this good is a great place to start.