We Come in Peace with the Timex T80 x SPACE INVADERS

Always one for a throwback, the Timex® T80 has returned as the commemorative style for yet another iconic collaboration: TIMEX T80 x SPACE INVADERS®, our classic digital watch reimagined to celebrate the peaceful meeting between two cultural phenoms. 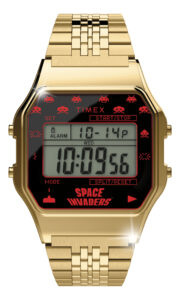 For those of you who didn’t spend your weekends raiding the arcade in the 70s and 80s, allow us to set the scene.

The year is 1978, and TAITO’s SPACE INVADERS, the first fixed-target shoot ‘em up video game, has just launched at an arcade near you. Coins in-hand, you finally approach the machine for a turn at the controls. Swarms of aliens begin descending in waves from the top of the glowing screen, and it’s up to you, dear player, to shoot and destroy your attackers with a laser canon, the only weapon available to prevent the impending invasion.

The pulsating, bass-heavy, electronic music intensifies, as does your heartrate. One, two, three lives lost—and just like that, it’s game over. Though defeated, you’re hooked, and SPACE INVADERS will go on to win the hearts of billions worldwide, becoming the most influential game in modern history. 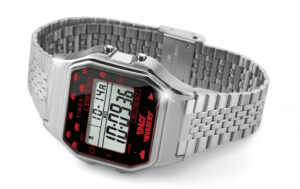 The limited-edition TIMEX T80 x SPACE INVADERS release embodies this experience like nothing else. It’s nostalgic to say the least, paying tribute to the game’s 40+ years at the top of the leaderboard, a legacy that began not long before Timex launched its first round of digital watches. As SPACE INVADERS singlehandedly ushered in the golden age of arcade video games, we were marking a turning point in timekeeping. This period of innovation, which kicked off with the world’s first sports watches to cross the finish line, continues to serve as the foundation for our digital wristwatch design even to this day.

Period-correct details, including the commemorative T80’s stainless-steel bracelet and INDIGLO® backlight, give it a straight-out-of-the-arcade feel, as does its three collectible colorways of silver, gold, and black. A 34mm case provides the structure we need to highlight the retro palette, not to mention the pixelated alien “INVADERS” imagery on the lens and case back. Of course, the watch is equipped with all the functionality you’d expect from Timex T80: an alarm, stopwatch, date display, and comfortable, ergonomic design at 30-meters water resistance. 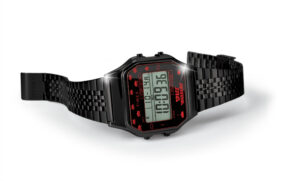 Finally, the ultimate game-changer: this watch scores even higher with the ability to play SPACE INVADERS’ unforgettable electronic sounds. In all its 70s glory, the melody is guaranteed to not only launch our alumni back to the era from which it came, but also introduce a new generation to the moment that changed entertainment forever.

See you at the arcade.