Nearly 170 years ago, Timex® revolutionized the timekeeping industry, making well-built home clocks accessible to more than just the wealthy. When we helped move the pocket watch to the wrist early in the 20th century, it was our ability to join traditional craftsmanship with leading technology that would go on to define our company as an innovative force in the watch world.

Then came the quartz crisis of the early 1970s. The first quartz wristwatch hit the commercial market in December of 1969, and in just a few short years, watches that housed this new battery-powered movement outpaced their mechanical counterparts in both production and sales worldwide. It was an advancement that rocked the industry; quartz suddenly offered consumers something more precise than the mechanical wristwatch, and its advent meant that much of the industry now found itself in jeopardy. Traditional watchmakers like us had to adapt, or risk fading into the history books.

And that’s where the story of Q really begins.

In the spring of 1972, we unveiled our very first quartz watch, aptly called the Q Timex, which not only sold 60% under the market value of the least expensive watch at that time, but also paved the way for a range of approachable, highly accurate timepieces to come.

You see, quartz watchmaking proved to be more than just a way forward for our company—it fulfilled our promise to deliver accurate and affordable wristwatches while staying true to our century-and-a-half of heritage. With one iconic design after another, we made quartz the standard by embracing this revolutionary technology, cutting down the cost, and bringing it to the people. Just like that, quartz was here to stay.

Our first models were stylish for the era but, as our wildly popular reissues have proven, those originals had ageless qual   ities that would see their appeal span across the decades. Case in point, the Q Timex 1979 Reissue sold out almost immediately following its May 2019 release. Kicking off our historical watch reissue project, this timepiece was the first of many revivals from the original Q Timex collection. The Falcon Eye, 1975 Reissue Day-Date, and two reiterations of the original Q Timex 1978 weren’t far behind, nor was the Q Timex LCA Reissue: a retro throwback to an age that brought even greater leaps in technology, from liquid-crystal displays, to boundary-pushing aesthetics.

Our reissue project continues to revive hits from our original Q series. Although, few perhaps have greater significance than the Q Timex 1972 Reissue, proudly released on the 50th anniversary of quartz. With period-perfect design traits pulled straight from the original, this reissue, like all Q Timex watches, recalls a period of upheaval in the watchmaking industry. It captures the bold spirit of an era—an evolution that changed everything.

It’s been half-a-century since the story of quartz began, but watches bearing the Q Timex symbol have always embodied the best of emerging technology and fresh design—qualities linking the originals to their modern-day editions. We’re proud to expand upon this chapter of our history as we move into the future, one tick at a time. 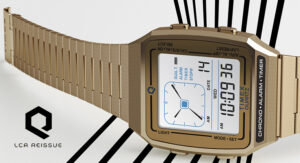