They Say Watch Design Comes Back Around. We Say This One Never Left.

Like most traditional watchmakers within the US as well as abroad, Timex went through a period of serious uncertainty when quartz timekeeping swept the industry between 1969 and the late 1980s. There were military production contracts, personal computers (don’t ask), collaborations with camera makers, joint ventures with NASA, and more. Countless brands, large and small, went under; some have been revived with new ownership and new production. Still others totally disappeared, never to resurface.

But at Timex? We kept on ticking.

It was during our most difficult period — the early 1970s — that Timex pivoted into quartz watchmaking, an absolutely critical move that laid the groundwork for not only saving our company but taking it to altogether new heights.

The decade itself was one of forward-searching strangeness, boldness and beauty, an era marked with groundbreaking ideas across art, music, and design. Clashing patterns, garish colors, flared pants, long hair, expanding consciousness, and deeper understandings of the world — these are the legacies of the era.

Like a funnel, the period’s design language gathered the swirling sensibilities of the time and brought them together — melted ingots in a forge, new combinations never seen before. And some of what came out was bold enough to last. 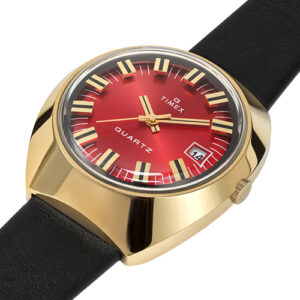 Speaking of boldness, Timex certainly made its mark. And today, on the 50th anniversary of the quartz watch that started it all, we’re making sure that mark never fades. Introducing the commemorative Q Timex 1972 Reissue: the continuation of a story that just keeps getting better.

Striking bright-red dial? Check. Polished gold-tone case in an uncommon (yet eminently wearable) barrel-shaped profile? Check. Gorgeous dimensional dial markings with joy-inducing hands to match? Check, check, and check. It’s okay if checking the time on this watch makes you giddy. It gets us going too.

The always-practical date window at 3:00 even matches the perspective angles radiating out from the center of the dial, doing its duty in rhomboid proportions. And under the period-correct domed acrylic crystal, with its dreamlike refractions around the edges, the many elements of this decades-old design all come to life like no time’s passed at all.

While most of the design traits of this watch come straight from the original, our design team took its standard dial markings — already gorgeous in their fit and finish — and elevated them, literally. Each applied hour marker is actually suspended above the dial’s surface, casting its own small shadow, extending out from a highly polished ring that runs the inner perimeter of the case. Even when you’re holding the watch up close to admire the details, you’re going to come to one conclusion: it’s far out, man.

Vintage watch collecting has its pitfalls — the passage of time is not always kind to the instruments made for measuring it — and contemporary watch collecting can feel like an exercise in measuring expendable income. Where this watch comes in, and where the rest of our Q Timex Reissue range sits comfortably, is the best of both worlds to the casual wearer and discerning collector alike. It’s practical, it’s reliable. You know what you’re getting when you buy a Q Timex Reissue. Our careful attention to the retro design and period-perfect details never overwhelms the fact that these are watches made to be worn — comfortable, accurate, and honest. A Timex, as it will always be, is a Timex.

It’s been half-a-century since the story of Q began. In celebration of its 50th birthday, we’re deeply proud to bring you this blast from the past as we continue to share the story of who we are. As for your story and the new watch you’re sporting, we say sit back and let the record play on for a little while. We’ll catch you on the flip side.